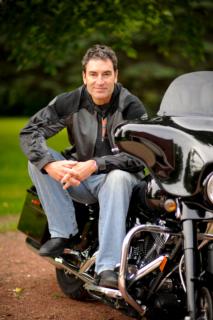 One of the most in-demand speakers and communications consultants in America, Ken Schmidt has lived a life that most can only dream about. He has toured the world on two wheels, met with presidents and royalty, partied with movie and music legends, and appeared numerous times on network news. As the former director of communications for Harley-Davidson Motor Company, he played an active role in one of the most celebrated turnarounds in corporate history and got paid to ride motorcycles. Now, Schmidt is a frequent speaker to business groups and academic communities throughout the world. Few speakers generate more positive word-of-mouth and referrals. Schmidt loves to startle people by exposing them to proven ideas and concepts they’ve never imagined, he says. After all he has accomplished, his philosophy of life and business hasn’t changed: Never do what’s expected; make yourself as noticeably different as possible, and have a lot more fun than you’re supposed to.