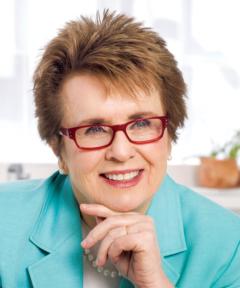 Billie Jean King is the founder of the Billie Jean King Leadership Initiative. She has long been a champion for social change and equality. King created new inroads for all genders in sports and beyond during her legendary career and she continues to make her mark today. King was named one of the 100 Most Important Americans of the 20th Century by Life Magazine and, in 2009, in recognition of her work as a social justice pioneer and her accomplishments in sports, President Barack Obama awarded her with the Presidential Medal of Freedom, the nation’s highest civilian honor. In 2017, Fox Searchlight released the critically acclaimed film “Battle of the Sexes,” starring Academy Award winner Emma Stone as King and Academy Award nominee Steve Carrell as Bobby Riggs, which depicts both players’ battles on and off the court as well as the cultural and social impact of the groundbreaking match.